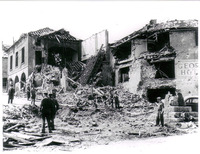 Bottom of Sun Hill, Cowes, after the raids 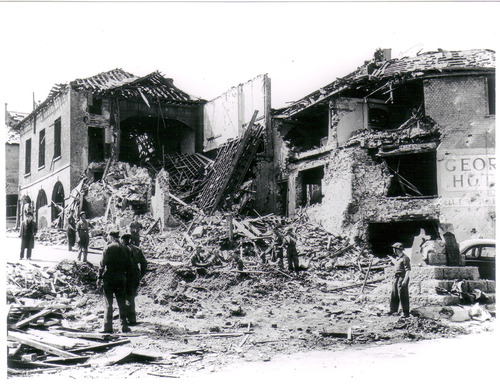 Blyskawica returned to Cowes five times during the War years for repairs and alterations.  Undergoing such a refit at J.S.White’s shipyard on the Medina River  in Spring 1942 she  was vulnerable to enemy air attack. However, the Admiralty refused a request from her Captain, Commander Wojciech Francki, to keep her armed whilst in dock. Nevertheless the Captain still saw to it that the Ship’s ammunition supplies were maintained.

Just before 11pm on the 4th May waves of German fighter bombers  began an attack on Cowes and her sister town of East Cowes. The planes used a variety of weapons: parachute flares, high explosive bombs  and incendiary bombs, augmented by  machine guns.  Blyskawica quickly became a floating anti-aircraft base in her defence of the towns. Her crew lit smoke canisters in an attempt to obscure the town from its attackers. She was able to use her large calibre guns to force the Lutwaffe to fly higher, affecting the accuracy of its bombing.  Further south along the river the Free French Naval units stationed at Marvin’s Yard opened up with smaller calibre weapons: one French seaman was killed. These first attacks lasted two hours with the Blyskawica’’s guns firing throughout.  The ship’s guns became extremely hot and the crew resorted to passing up buckets of river water in an attempt to cool them down.  It is said that the hands of some sailors were permanently deformed from the heat.  The actions of the Captain and his crew were nevertheless effective and many of the bombs failed to reach their targets.  Many of the incendiaries fell harmlessly onto nearby marshland.

As soon as the bombers left, search and rescue attempts began in the badly-damaged areas of the towns.  Then at about 2am another wave of German aircraft reached the area, subjecting the town to another two hours of bombardment, this time including armour-piercing bombs.  At dawn on what was now the 5th May, emergency services from all over the Island raced in to help, and Blyskawica’s company joined them, acting as firemen and diggers in support of the local teams. No aircraft was reported as shot down during the action but four were destroyed by RAF night fighters on their way home.

Some two hundred tons of explosives had been dropped on the shipyards and the towns that night, resulting in much damage.  Over 70 people had lost their lives and many more were injured. Even so, it was widely acknowledged locally that, but for the actions of the Polish destroyer’s Captain and crew on that fateful night the devastation would have been far greater.

(Captain Francki’s official report to the Admiralty covering 4th-5th May can be found on a separate page of this website.)

The following is the personal account of the Cowes Blitz by Maisie Frampton, nee Hodge, recounted many years after she had experienced it as a ten-year-old:

“I lived at number two Wellington Terrace, Kings Road (where Phoenix Flats now stand), and two shelters were built in our garden for the protection of the inhabitants of the six terrace houses.  I was ten years old and living with my mother and my father; also we had a young friend, Ernie Glass, living with us as he was working at J.S.White’s.  In No.1 lived a delightful elderly couple ‘the Broadwaters’ known affectionately to me as granny and gramps.  On the other side lived Mr. and Mrs. Summer and their daughter Muriel.  Then came ‘the Deacons’ with one young daughter Jean, a few years younger than me, and in No.5 were ‘the Kerseys”; their son Raymond was a playmate of mine.
At about 10pm on the fateful night the sirens sounded and suddenly incendiaries were raining down and the whole place was being set on fire.  For a while we sheltered under the stairs but, seizing the moment, my father ran down to the shelter with me in his arms…Our neighbours followed in quick succession…and ‘the Makers’ who ran the off-licence (in Lower Yarborough Road) and, I believe, Mrs. Maker’s sister and her very young daughter.  Next door to them lived my aunt, uncle and cousin Joan, the Russell family.
"After several hours of continuous attack it was a tremendous relief when the bombers appeared to have departed…however the respite was short-lived as the bombers returned…and the nightmare started all over again…Suddenly we were aware of yet another screaming bomb but this sounded different – the noise was absolutely deafening as it appeared to get closer and then for a split second ‘dead silence’.  Everyone sensed the impending danger and this was a time I shall always remember.
"Somehow we knew that this one was for us.  My father leaned across and took my hand and my mother leant across me covering me with her arms.  I know nothing from that moment until much later the following day when I drifted in and out of consciousness in the Frank James hospital.  Our shelters had received a direct hit by a massive bomb which I believe was an armour-piercing bomb meant for the ORP Blyskawica.  Obviously the timing was a split-second adrift and she was saved.  The severity of this explosion was so great that I believe it was the blast that was the cause of death of many of the occupants of the shelters – I know this was so with my father.
"I have always understood that there were 23 people in the two shelters and there were only three survivors – my mother Eva Hodge, my cousin Joan Russell and myself.  My mother was conscious some of the time and apparently saw me upside down with my face covered in the mud and clay from the bottom of the crater and she was able to clear this sufficiently to prevent me suffocating…”

Molly Gustar, one of the first aid party which attended after the attack, recalled that young Ernie Glass, who had been lodging with Maisie’s family, was taken into her ambulance apparently unconscious but without a mark on him.  Molly soon realised that he was dead: “I had been dancing with him the Saturday before, but that Tuesday night I had to take his body to the mortuary”