A BRIEF HISTORY OF THE SHIP

A Brief History of the Ship 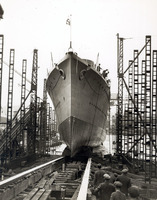 Blyskawica slips into the Medina 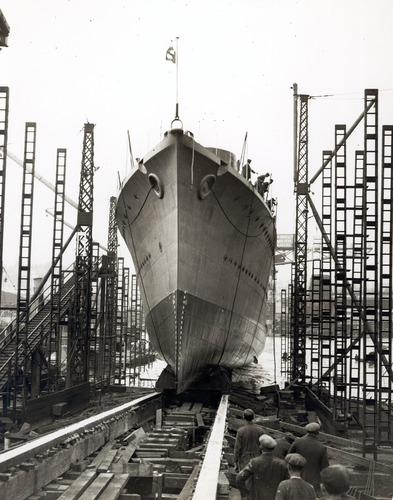 O.R.P. Blyskawica was the second of two Grom-class destroyers to be built by J. Samuel White of Cowes, Isle of Wight, for the Polish Navy. The Grom (Thunder) and Blyskawica (Lightning) were the only two ships of this class to be built and were the fastest and most heavily-armed destroyers of that time.  Blyskawica’s keel was laid down in September 1935 in J.S.White’s East Cowes yard.  When ready for fitting-out she was nudged across the river to the Cowes yard.  She was launched on October 1st 1936 by Mrs. Cecylia Raczynska, wife of Poland’s ambassador to Britain, and officially commissioned on November 25th 1937, after which she and Grom set sail for Gdynia, Poland’s Baltic Sea port close to Gdansk.

SECOND WORLD WAR
In March 1939, before war with Germany was even declared, Poland and Britain had devised the “Peking Plan” under which ships of Poland’s Baltic fleet would leave base when war was imminent and make their way to Britain.  Thus it was that on 30th August that year Grom, Blyskawica and Burza (Tempest) set sail from Gdynia, reaching the port of Leith on the Firth of Forth two days later on 1st September, the day Germany invaded Poland.  The three ships formed the backbone of the Polish Destroyer Squadron attached to the Royal Navy’s Home Fleet.  Blyskawica was given the pennant number H34, and she was soon in  action: she detected and attacked a German U-Boat in British waters on 7th September.

In November 1939 the Anglo-Polish Naval Agreement was signed. In this, the Polish Naval detachment, whilst being under the operational control of the British Admiralty, was to retain Polish crews commanded by Polish officers.  The ships remained subject to Polish regulations and uniforms and rank distinctions were Polish.  The vessels were regarded as sovereign Polish territory.
Blyskawica took part in many famous wartime operations: in Spring 1940, along with Grom, she entered the Norwegian Campaign, shelling German positions and targeting Luftwaffe aircraft.  The two destroyers had entered Vest Fjord off Narvik on 21st April where ORP Grom was bombed by a German aircraft on 4th May and sank with the loss of some 59 men: her torpedo room had received a direct hit. On 10th May Blyskawica left Norwegian waters.
On 28th May the Ship was ordered to begin providing anti-aircraft cover on evacuation route Y, part of Operation Dynamo, which had been devised to effect the evacuation of the British Expeditionary Force from Dunkirk.   During the operation she towed the damaged British destroyer Greyhound, carrying some 1,000 allied troops, back to Dover. She also escorted the French destroyer Cyclone, badly damaged in a torpedo attack, into Dover.  On 1st June she was ordered to withdraw for repairs.

During the course of the war the Ship sailed some 148,000 miles, escorted 83 convoys, carried out 108 operational patrols, had a hand in sinking two enemy warships, damaged three submarines and shot down at least four aircraft.  She lost five crew members and sustained 48 casualties.

AFTER THE WAR
Immediately after the war ended Blyskawica took part in Operation Deadlight, when over 100 German U-boats were scuttled off Western Scotland and Northern Ireland.  In July 1947 she returned to a Poland which was now under a Communist government, and she was converted for anti-aircraft activities.  In 1976 she became a museum ship, part of the Navy Museum at Gdynia.  It was not until 1989 that Poland gained the independence she enjoys today.

General Statistics of the ORP Blyskawica